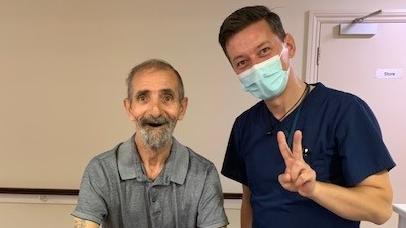 Mr Stockwell, or Billy as he prefers to be known, is living at Bourne House.  He has settled in well, and his story is special, but not unusual, in terms of the outcomes of people moving into Avonbourne Care Centre.

Billy had been living in the community up until the end of last year when he contracted COVID-19 and found himself in hospital from early December. After a lengthy stay, Billy had lost a lot of motivation and his zest for life was gone.  He was bed-bound, anxious, and reluctant to engage in conversations or activities, and without any goals.

Since he moved in, Billy has made huge progress and within a week, he was out of bed and in a wheelchair, starting to engage with those around him.  He’s been getting better all the time.  Having had help from three people to get him standing, Billy was able to move to walking with a carer supporting him on either side, and now he is walking on his own with the aid of a frame.

Lizzie Smith, Deputy Home Manager, explained how it happened. “It was all about building trust, and having patience, from both Billy and our team.”

Sadly, Billy’s sister passed away recently and it was very important to him to be able to go and pay his respects to her.  His family was supportive of the Avonbourne team helping Billy with his goal of getting out to do that.

Lizzie says it’s been a real joint effort. “It’s not just down to me, it’s been the whole great team, and it’s wonderful to see Billy up and about.  He loves being outside and he’s done some good work weeding the garden here.”

Billy agrees about the support of the care team.  “I don’t think I could have done it without the help they’ve given me here.  I was in hospital for five months and I didn’t get out of bed.  I’ve still got some panics, but there’s a lot more about me now.”

For someone who is clearly a true free spirit, it’s good to see Billy back on his feet.  “I don’t feel trapped any more,” he says, and he is grateful for the care he has received at Bourne House.