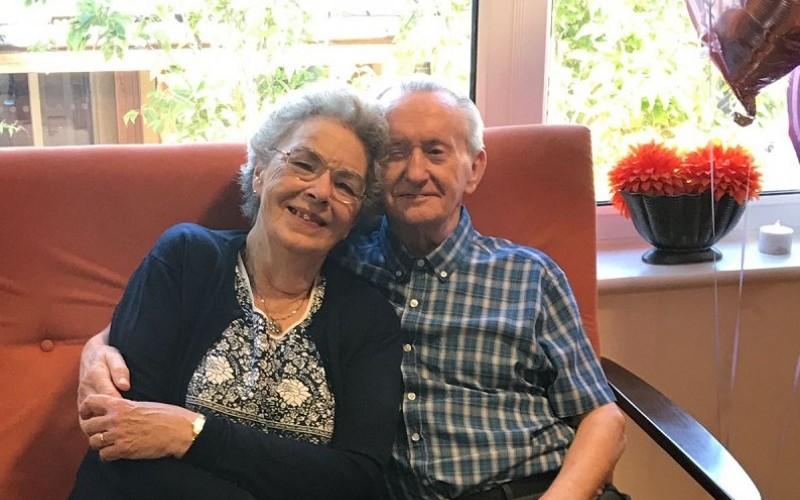 Les and Deidre met in the 1950’s when skiffle, a genre of Jazz, blues and American folk music, influenced what was listened to at the time. Les was part of a 3-man skiffle band where he played the base. His friend Burt knew Deidre’s parents and was asked by Deidre’s parents to play at her 21st birthday, they had arranged a small party to celebrate the occasion.

The party is where Deidre and Les first met, in December of 1957 Les asked Deidre on their first date. They later went on to get engaged in the April of 1958 and then married during the summer of the same year and have been married ever since.

Les is a resident of Chestnut Court and his wife Deidre lives in Cirencester. She has always visited Les but due to her ill health she has not been able to visit Les in 8 months.

To mark this significant occasion for the couple, the team at Chestnut Court decided to organise a surprise 60th anniversary for Les and Deidre.

The day began with the mini bus from Chestnut Court arriving at Deidre’s home to chauffeur her to Chestnut Court where a romantic dinner was set up for them both. The meal was made by the homes Chef, which accommodated both Deidre’s and Les’s dietary requirements.

Activity Coordinator, Mandie Merrett, and Dementia Lead, Anthony Haigh became waiters for the day to imitate a restaurant style dinner. A personalised cake was also given to the couple, baked by one of the homes volunteers.

When asked how she felt about the surprise Deidre said, “I am just so gob smacked, I am ever so grateful, and this has by far been the best wedding anniversary”.

Deidre also added “Everyone at Chestnut Court has been so kind to us and even though the location of Chestnut Court is far from where I live, I would never move Les to a home closer to me as I am so happy with the care given here at Chestnut Court. Thank you to every one of you. You all are very special to me”.