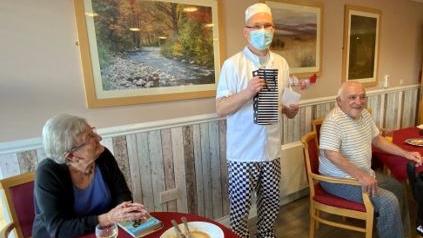 20 October was International Chef's Day and at Athelstan, the residents celebrated their very own international head chef and his kitchen team!
Rafal trained for four years at catering school in Poland before becoming chef to the Major General of the Polish Army planning and preparing parties and banquets.
Following that he became a chef at RAF Cranwell.
Residents showed their appreciation by presenting Rafal with a bottle of Champagne and some chocolates, along with a thank you card signed by everyone to show how much they appreciate him and his team.