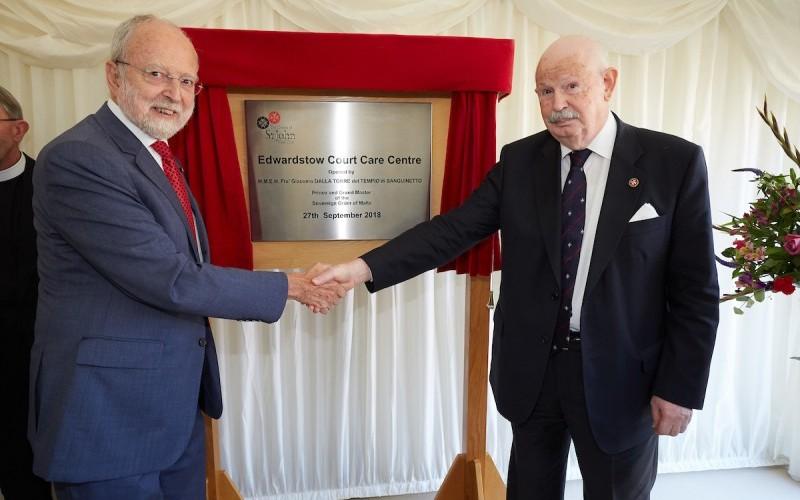 The opening was a great occasion and was attended by the organisations involved in the build and the local community including children from Stow Primary School.

The Grand Master met residents and employees as he toured the care centre and was shown the home and its facilities. During the visit, he met residents involved in a range of activities; some were making dough for pizzas which they would cook in the new pizza oven recently purchased by the home, whilst others were making flower corsages and ribbon bows, expertly guided by the local florist, which they then wore to the official ceremony.

The commemorative plaque took centre stage in the marquee and was unveiled by The Grand Master following a blessing by The Very Revd Alec Knight, OBE and Dom Edward Corbould, OSB.

Residents Margaret and Kath presented The Grand Master with flowers and a gift on behalf of those living and working at the home.

The school children loved the games in the garden including hook-a-duck, a coconut shy and of course plenty of candy floss! The residents of Edwardstow Court enjoyed seeing the children play and having so many visitors to their home.

Celebrations were rounded off with a glass of fizz and a toast following some well wishes by OSJCT chairman Don Wood, Chief Executive Dan Hayes and Deputy Chief Executive Kerry Dearden.

A great day was had by all and we wish Edwardstow Court Care Centre a very happy future.