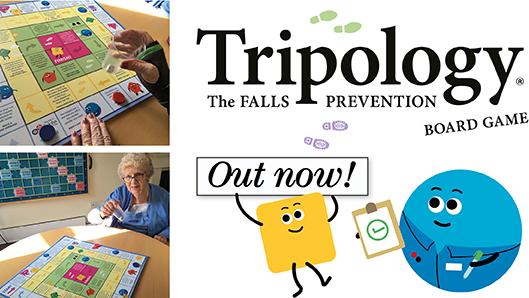 OSJCT has developed a board game tailored for elderly residents and care home workers to raise awareness of the causes, and measures to avoid, falls. The game called Tripology, similar to Snakes and Ladder, was developed by Quality Improvement Lead, Vanessa Gail, and launched by the Trust in its 65 care homes this October.

Falls in the elderly are common. Around a third of people aged 65 and over, and around half of people aged 80 and over, fall at least once a year, and 20% of hip fracture patients entered long-term care in the first year after fracture*.  Factors which contribute to falls include poor strength and balance, underlying health issues such as low blood pressure and poor vision, acute infections and poor decision making.

Comprehensive falls prevention training takes place every 16 months across all OSJCT homes, led by Vanessa as part of the Trust’s falls prevention policy. Vanessa created the board game to complement regular training, and to create something fun and useful which could be played by residents and care workers together.

The aim of the game is to travel across the board, using magnetic counters, to a safe finish. Some squares send the player forward based on actions which prevent a slip, trip or fall, or they are sent backwards for negative actions or taking short cuts in care. Example instructions are: You used your call bell to request assistance to walk safely; and You tripped over a box that was left in the corridor.

The board game facilitates discussion about falls preventions and ways to maintain positive health and work practices.

Vanessa said: “I developed this game to complement our training. I’ve really enjoyed seeing it come to life and being played during the pilot. Feedback has been very positive, and many residents have found it an engaging activity. I look forward to seeing the impact it has in our homes.”

Tripology was created initially as a pilot project as part of a falls prevention campaign, which benefited from a £5k grant from Aviva Insurance. The game aims to reduce the rate of falls in care homes. If this is proved to be the case, it may be made available to other care home operators later next year.