The two who became friends at Beckside share their stories. 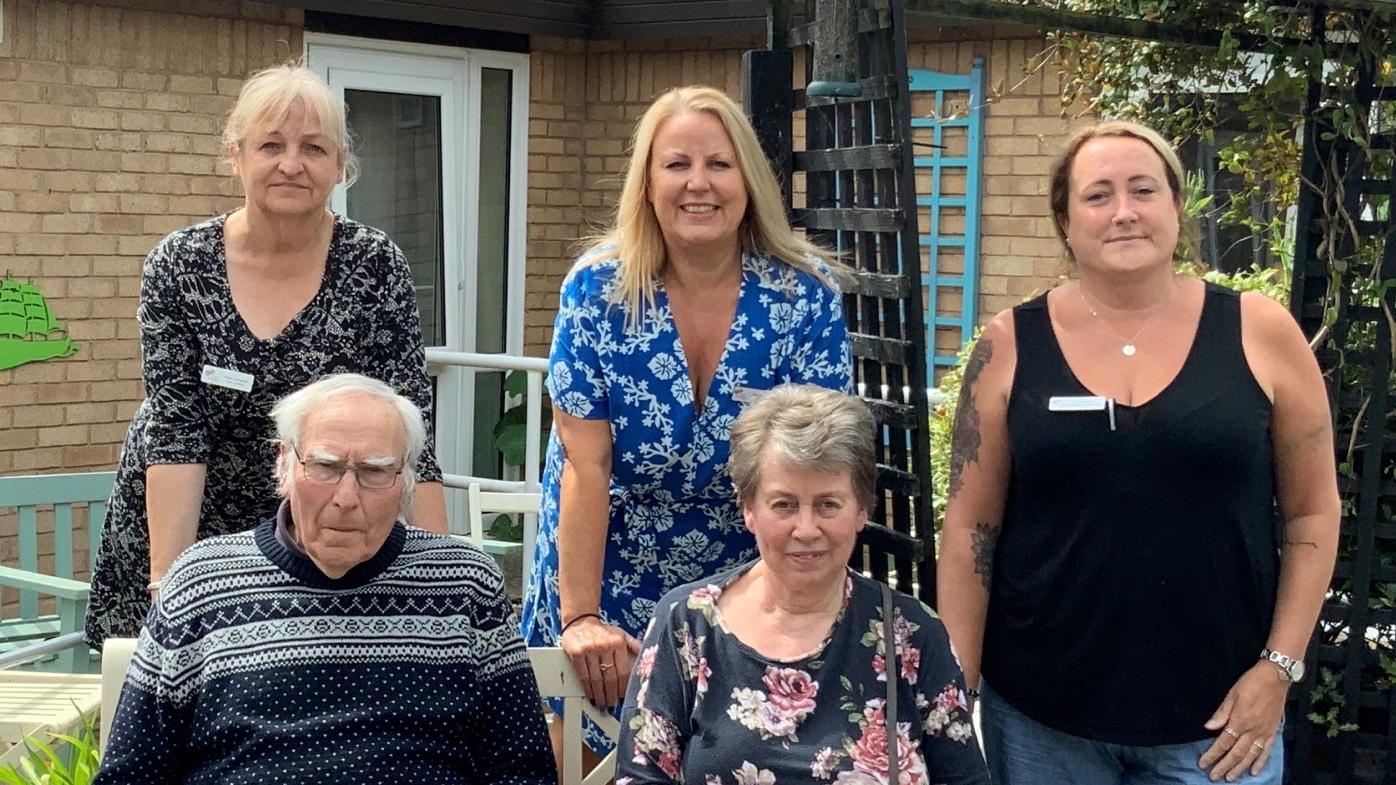 Brian and Pam who were discharged to Beckside, in a critical state last year, have beaten the odds and survived Covid and an Acute Ischaemic Stroke (respectively). They are now thriving thanks to the expert nursing care and continual encouragement of the North Hykeham home’s dedicated team.

The two firm friends recently came together to speak about their experience with Home Manager, Andrea Brooks, Deputy Manager, Sal Barton and Administrator, Claire Campbell (pictured). They shared their journeys with joy and humour and paid credit to the team at the care home for their constant care, optimism, and cheerfulness.

Brian, 79, from Brant Broughton, was discharged from hospital to the home in November in an immobile state and heavily medicated after contracting Covid. Despite being on an end-of-life care plan Brian made a full recovery and has returned home. He has been reunited with his dog, is back to driving and is planning to become a volunteer at the home.

Pam, 71, who lived in Gate Burton for over 30 years, came into the care home from a hospice after a stroke left her unable to speak or walk. She now tracks her steps count on a Fitbit and enjoys joining in with the home’s quizzes. Pam recently bought a new bungalow and is having it adapted before she moves into it later this year.

Sal Barton said: “Seeing Pam and Brian recover from the critical state in which they were admitted into our care to the lively, confident people we know today has been overwhelming for the team here. They are both inspirational people, with a big presence here around the home. I’m humbled to be part of their journey.

“It is unusual for residents in a care home to make a full recovery, but we treat everyone who comes to Beckside for care as an individual. Despite their poor prognosis we encouraged Brian and Pam to make small steps and now they are ready for independent living.”

Brian said: “Beckside is a magical place. The care is excellent, and everyone is friendly.”

“The team remained cheerful, even when I didn’t think I’d get better. They helped me to stay positive and now I’ve got my life back.”

Andrea Brooks said: “We will miss Pam and Brian very much, and we look forward to them coming to visit regularly.”

Brian’s journey from near death to returning home

Brian contracted Covid in October 2021. His body reacted badly to the virus, and he spent several weeks in Lincoln County Hospital. His condition was failing and there was very little the hospital could do for him. Brian recalls that he was almost sent back home, with provision for 4 hours’ care each day, but he thanks his lucky stars that he went to Beckside. In November, Brian was moved to the care home, where the team expected to give him palliative care and make him as comfortable as possible. His two children had been prepared for the worst.

Brian was initially very weak, confused, and distressed due to medicines delivered intravenously. He slowly became more aware and interested in what was going on around him. Within three weeks, Brian was taken off heavy medication and his body started to recover and gain weight after losing three stones.

With a second chance at life, Brian became much more active and determined to get better. He started to eat and drink unaided, and to walk around the home with a friend. The care home arranged regular physiotherapy, and Brian started to relearn skills to support his independence.

Brian said: “Small things were big steps, I remember the first time a carer came in to get me up, dressed and sitting in my chair for the first time. That was a big turning point, and I was soon able to go on a trip outside the care home in a wheelchair.”

By Christmas Brian was fully mobile and became a well-known character in the home. He volunteered to help with the tea trolley and enjoyed visiting the kitchen team.

By February 2022, Brian was ready to return home. He started to alternate nights at home, with nights in the care home, to build up his confidence. Since returning home Brian has bought himself a new car and is making plans to come back and visit the care home as a volunteer.

Brian said: “I’ll never take my daily wash routine for granted, it’s the greatest thing for me to manage by myself and it came about thanks to the encouragement of the whole team at Beckside.”

Pam spent two-weeks in St Barnabas Hospice before being moved to Beckside in May 2021. At the time, she was completely paralysed after an Acute Ischaemic stroke and her children had been told that she was unlikely to recover. However, after five weeks of constant care from the team at Beckside, Pam started to move her hand, and carers could see that she was trying to communicate.

Over the coming weeks, Pam slowly regained movement and started to speak. Pam recalls the joy she felt at being able to feel again. She said: “I had been told that I was dying, but it was wonderful to feel my body move, and to have some goals to aim for, like being able to walk again.

“Within two months, I was able to have a shower, it was a beautiful experience, after all those weeks being bed-ridden.”

The home organised for Pam to see the stroke team four times a week to help her with speech and movement. By December Pam was using a Fitbit to track her steps as she practiced walking around the home, speaking to staff and residents on her way. She regularly clocked up 2,400 steps each day.

Pam has now bought a bungalow close to where her daughter lives and just seven miles from her son. The former Post Office Area Manager who looked after 41 Post Offices before her retirement in 2013, is looking forward to the next chapter in her life.

Pam reflects on the emotional rollercoaster the family went through. “The team at the care home provided emotional support for my children, who had been told to expect the worst. They visited regularly and it was very hard for them. The care home team were able to explain what was happening, to be realistic, as well as sympathetic and encouraging, as we worked towards my recovery.”

Home Manager, Andrea Brooks said: “We were very excited to see Pam recover, and as a young 71-year-old, we are delighted that she is making plans to move out of the care home and live independently."