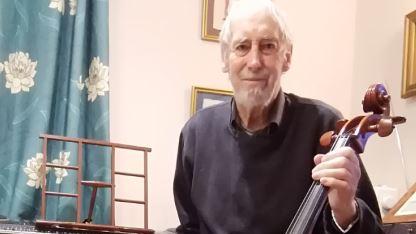 Cellist and piano player Derek has been playing the keyboard for residents at their regular choir sessions, bringing joy and music to fellow residents and employees alike. Those who live with dementia, including Derek’s wife Glenda, especially enjoy these regular sessions.

Eighty-six-year-old Derek and his wife Glenda have been living at Goodson Lodge since 2017. They spend most evenings sitting together as well as attending events and activities such as the regular choir sessions.

Derek is very musical and played cello in the Argyle String Orchestra in Bath. He was a chorister and had piano lessons as a child. He taught himself to play the cello and can also play the harpsicord and bagpipes. Another skill, which Derek made use of, is making instruments. He has made cellos and violas, including the cello which is proudly displayed in his room and just seen here. Glenda and Derek’s daughter Deborah is also musical and achieved Grade eight as a cello player.

As a regular performer in the home before the pandemic, Derek missed performing during times of national lockdown although he played for himself in his own room. Derek found renewed enthusiasm for performing as he has resumed playing in the home over the last few months.

Alex, Activities Coordinator, said: “It’s truly wonderful to see Derek playing the keyboards at the sessions. His passion for music shines through and he gets other residents, many with complex dementia, singing along.”