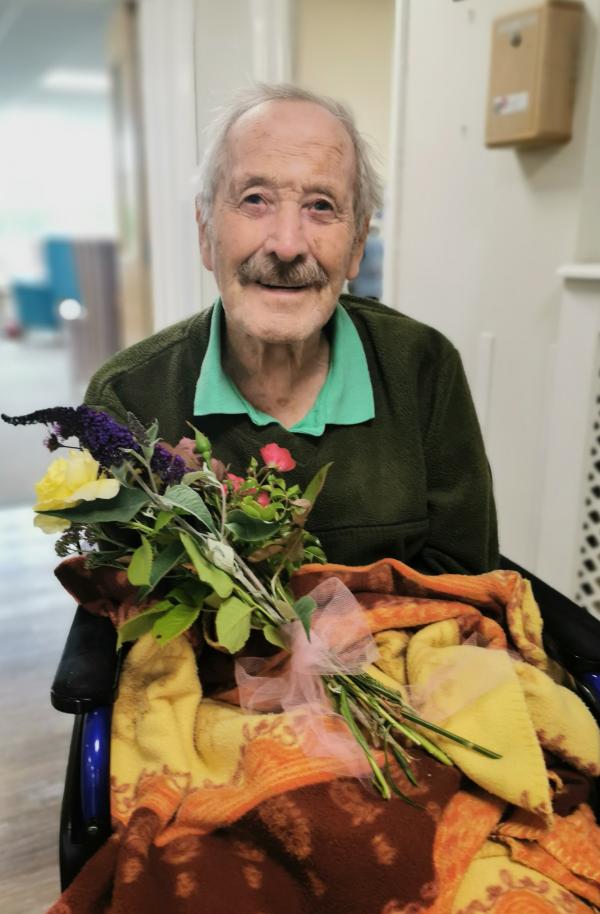 Thomas and his wife Patricia

Thomas, a resident at Digby Court in Bourne went to visit his wife, Patricia. The team at Digby Court picked some flowers from the home’s garden for him to give to her.

They are such a lovely couple who are still to this day very much in love. 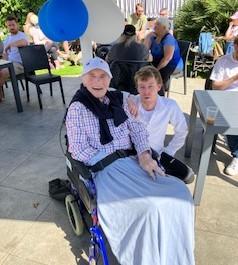 Ian, a resident at Grevill House in Cheltenham, enjoyed a wonderful Saturday afternoon at the Exfest music festival held at The Exmouth Arms in Lechampton.

It was a special day for Ian because his son, Paul, is the lead singer in Sym & The Shady Branch band who were playing! Ian saw his son perform and he really wowed the crowd at the show.

Ian was so happy to watch Paul, and he was able to catch up with family members who he had not seen for a while.

The trip took place thanks to Sean, a Carer at Grevill House, who looked after Ian for the afternoon. 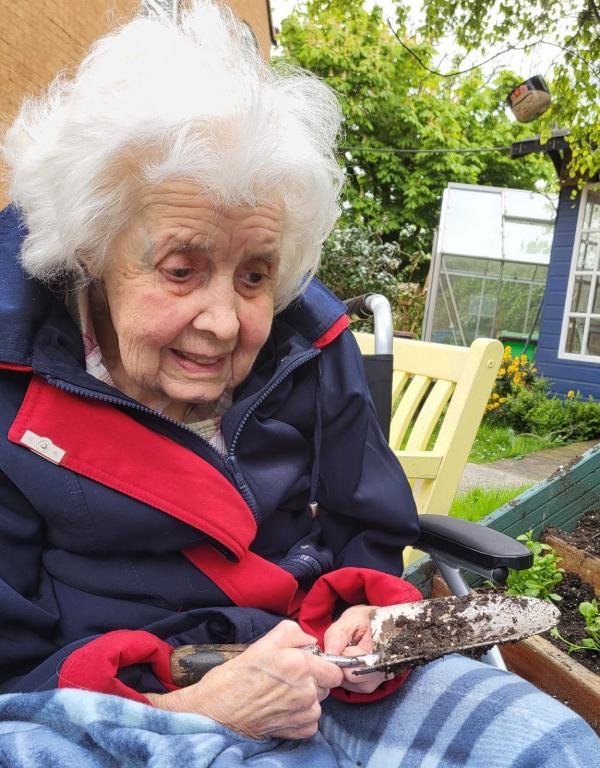 Joy thoroughly enjoyed planting our new plants in the garden.

Joy loves to be outside in the garden as her passion is gardening. Other residents at Brookside have also spend time in the sun helping to plant the flowers. This is in preparation for the Trust in Bloom competition, an internal event which Brookside is taking part in this year.

Joy helped pick out the flowers for us to plant and is looking forward to more days in the garden now the weather is getting warmer.

Joy said that spring is her favourite time of year as being outside in the garden just makes everything feel better. 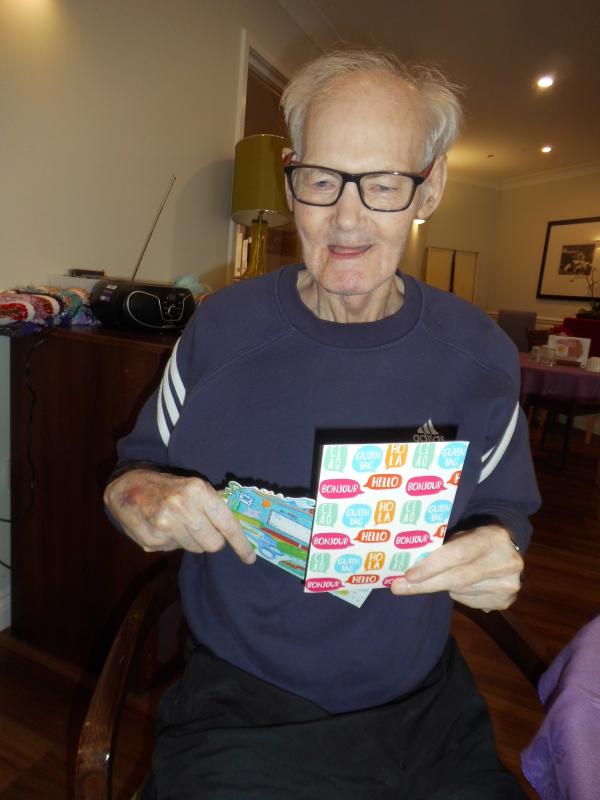 At Langford View during the pandemic some of our residents received letters from Bicester Act of Kindness ladies’ group. The letters had been written and distributed to counter loneliness.

Each month residents received letters and photos of interest, which put a smile on many of their faces.

Bob wrote to a family from Bicester. They told him that they were moving to Canada for three years, so Bob was uncertain if he would still be able to receive any more letters from the family.

However, recently a special letter arrived for Bob all the way from Canada. He was very happy to read their update. 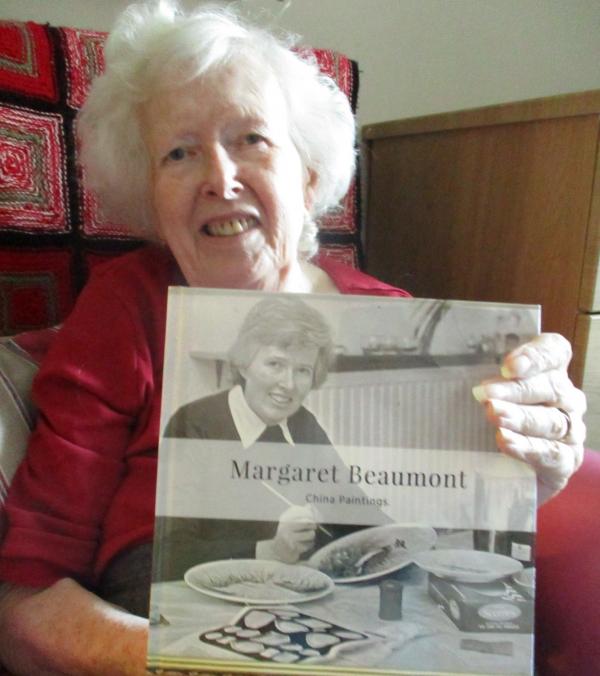 Margaret, one of our talented residents from Whitefriars in Stamford, enjoyed a one-to-one chat with Sue an Activities Co-ordinator. She enjoyed showing Sue one of her favourite books. The book is full of beautiful China paintings. Margaret enjoys arts and crafts. During the conversation the two women found out that they both visited the Alford craft market. 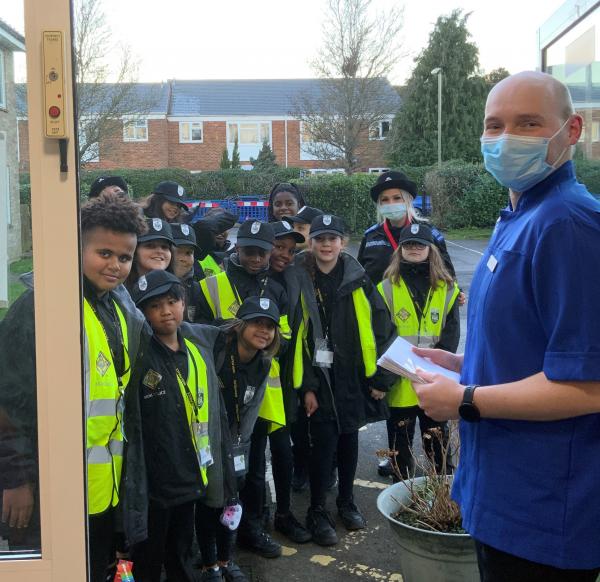 We received our first 20 letters from the Mini Police at Longlands. They were hand delivered, although we originally planned for the children to meet our residents in person, but they couldn’t due to Covid-19 restrictions.

However, the children still introduced themselves in the letters and the residents thoroughly enjoyed reading these.

The Mini Police are a programme run by Thames Valley Police; they operate in other areas within the force, but Blackbird Leys in Oxford is currently the only place where they have Mini Police. It is interactive volunteering which gives the children an opportunity to introduce them to a positive experience in policing and gets them involved in the local community. The children are from Pegasus school in Oxford and are in year 5, aged between 9 to 10 years. They are also about to enrol 20 children from Orchard Meadow’s school too.

Our care homes remain open to new admissions and we can promise a warm welcome and the highest level of professional care to anyone moving into an OSJCT home.